Trending News
I Have A Dream Limited releases 3 new brands –...
Baahubali’s Bhalaldev aka Rana Daggubati celebrates Karwa Chauth with his...
Aww! Sidharth Shukla and Shehnaaz Gill off to Chandigarh
What you need to know about Reliance Retail and PIF...
What? Delhi to be called Corona capital soon?
Paytm’s All-in-one POS devices crosses 2 lakh businesses
Abhishek Bachchan is grateful to have sustained in his career
Divyanka Tripathi urges the importance of celebrating Karva Chauth
Eijaz-Pavitra earn the name of fake-desperate from Devoleena
Alibaba plans to invest in an online fashion retail venture
Home Technology Tutela’s speed & latency test shows Airtel as the winner, keeping Reliance Jio & Vodaphone behind.
Technology

A report by Tutela’s Mobile Experience November 2019 for the month of August – October 2019 showed that Airtel records the highest download & latency speed. This makes Airtel a clear winner in the latency speed keeping Reliance Jio & Vodaphone behind.

Tutela’s report was assessed for the month August to October & it shows the report on the basis of the mobile experience and usage of the users. 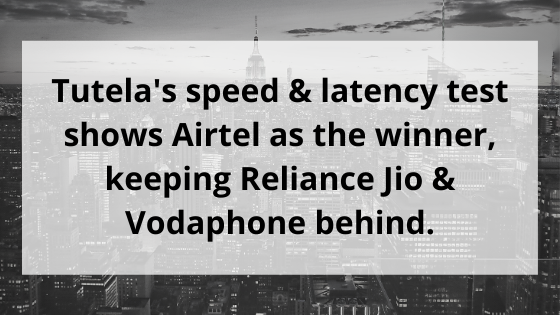 The report also provides a different result for upload speeds & it also shows that the median transfer speeds are responsible for the speed test results for a 2MB file download and 1MB file upload.

For gamers, especially, the Internet speed is the most essential factor in choosing a network operator. With poor latency levels, the gaming experience can be hampered by a delayed Internet connection.

And, as far as the latency speed is concerned, Airtel again tops the chart with 26.2 milliseconds (ms) of latency. Reliance Jio comes at the second position with 27.6ms. Vodaphone takes the third spot at latency speed of 27.9, followed by Idea at 31.6 ms latency. BSNL takes the last place on the list with only 45ms.

In terms of downloading & transferring data, Airtel emerges as a clear winner for both the aspects beating other mobile operators.