Trending News
I Have A Dream Limited releases 3 new brands –...
Baahubali’s Bhalaldev aka Rana Daggubati celebrates Karwa Chauth with his...
Aww! Sidharth Shukla and Shehnaaz Gill off to Chandigarh
What you need to know about Reliance Retail and PIF...
What? Delhi to be called Corona capital soon?
Paytm’s All-in-one POS devices crosses 2 lakh businesses
Abhishek Bachchan is grateful to have sustained in his career
Divyanka Tripathi urges the importance of celebrating Karva Chauth
Eijaz-Pavitra earn the name of fake-desperate from Devoleena
Alibaba plans to invest in an online fashion retail venture
Home Lifestyle The benefits of including pear in our diet.
Lifestyle

Different diets come & go & most of us are always at the receiving end of the after-effects of these diets. There are many who crave for various food items while on a diet making unique recipes out of it & then there are few others who crave for different fruits to keep going the entire day. Most of the people choose regular fruits like bananas & apples to satiate their fruit cravings, but it is essential to have a look at other healthy fruits as well, which can prove to be equally beneficial. 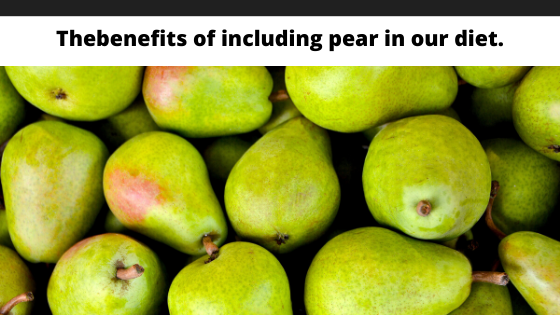 One of the most under-rated fruits is pears. No one really talks much about this amazing fruit filled with tons of healthy contents which can even keep bodily ailments at bay. Although, pear remains as one of the less popular fruits, it provides some real goodness to the body.

Called as “Nashpati” in Hindi, pear is one of the healthiest fruits that one can resort to because it contains high amounts of fibre, minerals & antioxidants. It is said that one must include pear in their diet regularly either in a juice form or as a whole fruit.

Having the ability to contain sweet cravings, pear comes from the family of Rosaceae & is considered to be a must-have fruit in our diet.

Pears help in fighting against the risk of strokes as it is high in the source of flavonoids, according to Correa. For women under 50, 24% of the adequate intake of fibre is provided by a medium-sized pear & fibre helps fighting against inflammation & constipation. Pear is also a high water content rich fruit that flushes out the toxins from the body by acting as an antioxidant. It also is Cholesterol free, sodium free & fat free. And, as per the ranking on the glycemic index scale from 1 to 100, a medium-size pear ranked 38, proving that it is a low glycemic food as well.