Trending News
I Have A Dream Limited releases 3 new brands –...
Baahubali’s Bhalaldev aka Rana Daggubati celebrates Karwa Chauth with his...
Aww! Sidharth Shukla and Shehnaaz Gill off to Chandigarh
What you need to know about Reliance Retail and PIF...
What? Delhi to be called Corona capital soon?
Paytm’s All-in-one POS devices crosses 2 lakh businesses
Abhishek Bachchan is grateful to have sustained in his career
Divyanka Tripathi urges the importance of celebrating Karva Chauth
Eijaz-Pavitra earn the name of fake-desperate from Devoleena
Alibaba plans to invest in an online fashion retail venture
Home Entertainment Katrina Kaif’s fans spring to her support against Rohit Shetty’s recent remark about her
Entertainment

Katrina Kaif who has a huge fan following on social media. (33.2 million followers on Instagram 14,370.623 on Facebook saw angry reactions from them with a “ shame on you Rohit Shetty “ trending against  Director Rohit Shetty the director of her upcoming film Sooryvanshi based on a remark made by him recently which they considered derogatory and biased.

Sooryavnshi is one of the much awaited big releases this year starring Akshay Kumar, Ajay Devgan, Ranveeer Singh and Katrina Kaif. In a recent interview when the Director was asked which of the stars he focuses on while watching the monitor , it was  Rohit Shetty’s reply to this question which sent the fan base of Katrina in a frenzy raising a huge social media storm. Rohit Shetty mentioned that he looked at all 3 of the male stars. as for Katrina he mentioned how she had blinked during the shot when she had to walk along with the 3 male actors which  had blasts in the background and wanted a retake but he declined and chose to go ahead with the shot without a retake and instead told her “ no one is going to look at you.” A screen shot of this quote which went viral subjected him to trolling by Katrina’s huge fan base.

One twitter user wrote ‘ Most dangerous fandom on twitter is Katrina ki fandom so don’t mess with us anybody. We will destroy you”

Shame on you Rohit Shetty 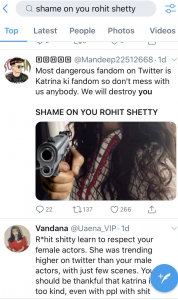 While yet another fan wrote “R*hit Shitty learn to respect your female actors. She was trending higher on twitter than your male actors, with just few scenes. You should be thankful that Katrina is just too kind, even with ppl with shit mentality like you “