Trending News
I Have A Dream Limited releases 3 new brands –...
Baahubali’s Bhalaldev aka Rana Daggubati celebrates Karwa Chauth with his...
Aww! Sidharth Shukla and Shehnaaz Gill off to Chandigarh
What you need to know about Reliance Retail and PIF...
What? Delhi to be called Corona capital soon?
Paytm’s All-in-one POS devices crosses 2 lakh businesses
Abhishek Bachchan is grateful to have sustained in his career
Divyanka Tripathi urges the importance of celebrating Karva Chauth
Eijaz-Pavitra earn the name of fake-desperate from Devoleena
Alibaba plans to invest in an online fashion retail venture
Home Entertainment Vijay Deverakonda to pair up with Ananya Panday in his first Bollywood venture.
Entertainment

Fans rejoiced when the news broke in of Vijay Deverakonda being paired opposite Ananya Panday in the former’s debut Hindi film. Puri Jagannadh is donning the hat of a director for this film which is produced by Charmme Kaur & Karan Johar’s Dharma Productions.

The film is yet to be a given a title, however on Thursday; it was made public by the makers of the yet-untitled film that Telugu actor Vijay Deverakonda will be sharing screen space with ‘Student of the year 2’ actress Ananya Panday in his debut Hindi film which will be helmed by Puri Jagannadh. The film which is a joint venture by Dharma Productions & Charmme Kaur will not only release in Hindi but, also in other South Indian languages. 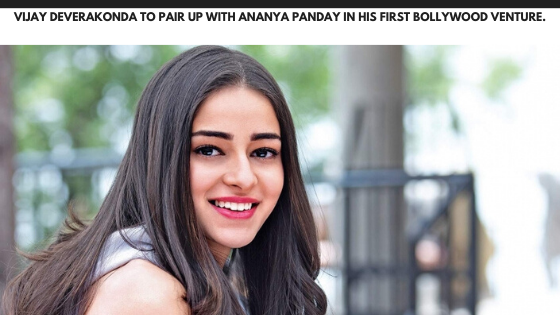 Calling Ananya on board, Dharma Productions on their Twitter handle exclaimed the news saying, “Happy to welcome on board the gorgeous @ananyapandayy for our Pan-India venture with @TheDeverakonda directed by @purijagan, produced by @karanjohar, @Charmmeofficial & @apoorvamehta18. Let the madness begin.”

Ananya also welcomed Deverakonda in the Hindi film industry by tweeting, “Welcoming Mr Deverakonda @TheDeverakonda to Bollywood.” To which Vijay replied saying, “Ananyaa And we warmly welcome you to the Telugu, Tamil, Kannada and Malayalam industries.”

The Pati Patni Aur Woh actress had even shared her happiness on doing her first Pan-India film by sharing pictures of her script reading session with Vijay & the team. She wrote on her social media handle, “Happy, blessed and excited to be associated for a Pan-India film with our director @purijagan Producers @karanjohar @Charmmeofficial @apoorvamehta18 @DharmaMovies @PuriConnects #PCfilm.”

Fans all over from both the Hindi & the South film industries got ecstatic in seeing the new & refreshing pair of Vijay & Ananya. Several fans flooded their social media handles with messages & went gaga over the pictures shared by the actors & the makers.

An delighted fan wrote, “Now everyone for sure is super excited… Setting the flames on. Let the madness begin @TheDeverakonda @ananyapandayy @Charmmeofficial @purijagan. Wishing full rowdy to the entire team on this massive project.”

Another elated fan wrote, “We are very lucky to see you in @TheDeverakonda in Bollywood movies. Best of luck for your new project with @ananyapandayy, we are very excited for the movie #VijayDeverakonda #AnanyaPanday #Bollywood.”

In January this year, Johar had shared pictures of the Mahurat shots announcing the film with Puri, Vijay & Charmme posing for the photos. And, recently it was even reported that Ananya eagerly wanted to work with Vijay & expected to start the shoot with him in mid-March or in April first week.