Trending News
I Have A Dream Limited releases 3 new brands –...
Baahubali’s Bhalaldev aka Rana Daggubati celebrates Karwa Chauth with his...
Aww! Sidharth Shukla and Shehnaaz Gill off to Chandigarh
What you need to know about Reliance Retail and PIF...
What? Delhi to be called Corona capital soon?
Paytm’s All-in-one POS devices crosses 2 lakh businesses
Abhishek Bachchan is grateful to have sustained in his career
Divyanka Tripathi urges the importance of celebrating Karva Chauth
Eijaz-Pavitra earn the name of fake-desperate from Devoleena
Alibaba plans to invest in an online fashion retail venture
Home Entertainment The ‘Cats’ joke made by James Corden and Rebel Wilson at the Oscars offends the Visual Effects Society.
Entertainment

The ‘Cats’ joke made by James Corden and Rebel Wilson at the Oscars offends the Visual Effects Society.

The 92nd Academy Awards saw all the glitz & glamour of the Hollywood industry. Many names & many big films became the talk of the town for winning the prestigious award at the Dolby Theatre in Los Angeles, the USA. But, what is an event without a bit of controversy?

The award ceremony saw James Corden and Rebel Wilson dressing up as ‘Cats’ & presenting an award for the Best visual effects at the event. Both of them poked fun of the CGI effects in ‘Cats’ & the same did not go down well by The Visual Effects Society (VES). 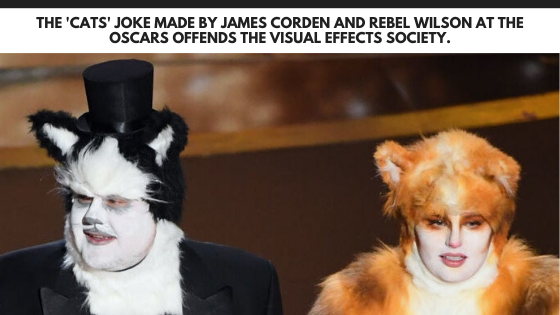 The ‘Cats’ joke made by James Corden and Rebel Wilson at the Oscars offends the Visual Effects Society. (1)

Though both the actors were hilarious with their act & broke everyone present their into laughter by saying, “As castmembers of the motion picture ‘Cats’, nobody more than us understands the importance of good visual effects.” The VES criticised the award organisers for taking a dig at the film’s visual effects & made “visual effects the butt of a joke.”

The Visual Effects Society that comprises of more than 4,000 members belonging to the technical field of filmmaking did not like the act making fun of the VFX done for ‘Cats’. The society which is said to be focused on recognising, advancing & honouring visual effects as an art form slammed the academy organisers for humiliating the art & work of VFX artists, for making ‘Visual effects the punchline” & for suggesting that the film ‘Cats’ did not do well because of the poor VFX.

Showing disappointment, the film body released a statement on their official website saying, “The best visual effects in the world will not compensate for a story told badly. On a night that is all about honouring the work of talented artists, it is immensely disappointing that The Academy made visual effects the butt of a joke. It demeaned the global community of expert VFX practitioners doing outstanding, challenging and visually stunning work to achieve the filmmakers’ vision. Our artists, technicians and innovators deserve respect for their remarkable contributions to filmed entertainment, and should not be presented as the all-too-convenient scapegoat in service for a laugh.”

In the end, the film body also hoped that the Academy will properly honour the “craft of visual effects and all of the crafts, including cinematography and film editing.”

Putting less stress on ‘stress’ through these simple tips & tricks