Trending News
Is the lockdown during Covid 19 or mental depression to...
Shocker for Bollywood – Actor Sushant Singh Rajput commits suicide
This is Ahmad Essam
Karan Johar says he is now available for Father roles...
India’s Covid Cases record a steep rise – cross the...
Rockstar singer Guru Randhawa releases a devotional song amid coronavirus...
Happy Buddha Purnima 2020 Quotes and Wishes for Facebook, WhatsApp
Neetu Singh has been pouring love and gratitude in her...
After e – commerce gets a go ahead, day 1...
News of migrants being asked to pay for their train...
Home Entertainment Reel life actors clap for real life heroes during the Janata Curfew today
Entertainment

In a typical role reversal witnessed today, Bollywood actors and celebrities stood in their balconies, terraces and the open areas of their buildings to applaud the work being done by the staff and employees of hospitals, the police department, and other essential services which are working round the clock to support the patients of the Coronavirus pandemic.

This initiative was suggested by PM Modi during his recent live address to the nation. He called upon all the Indians to cooperate with the government and behave responsibly. A self imposed curfew from 7 a.m to 9 pm was declared on 22nd March which would prevent people from moving out and interacting with each other thus minimizing the risk of infection for one and all.

India currently, is in its 3rd stage of pandemic where community contamination is a grave possibility therefore this move was suggested by the PM which was also a good form of “social distancing.” In a novel initiative he suggested the time of 5 pm today during which the entire nation would clap and applaud the heroes who were committed to their purpose of serving the sick and the nation. 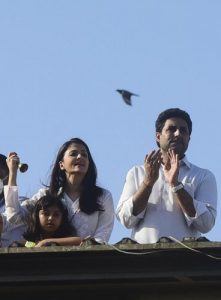 It was heartening to note the huge support that this first of its kind – the clapping movement garnered in India as well as from Bollywood.

In the age of social media it was no surprise then, that  Instagram, facebook and twitter pictures and videos of stars supporting this drive surfaced during and soon after the 5 pm clapping. Amitabh Bachchan and his family including daughter in law Aishwaraya ,  son Abhishek, daughter Shweta, granddaughter Aradhya and Navya were seen clapping and ringing bells.

Popular Director Karan Johar was seen beating pots and pans on the terrace of his house along with his family.

All of them through this initiative showed their solidarity through clapping, beating drums and utensils, ringing bells in  praising and applauding the work of the real life super heroes who during these coronavirus ridden times are standing strong  and battling against all odds to serve the public !