Trending News
Is the lockdown during Covid 19 or mental depression to...
Shocker for Bollywood – Actor Sushant Singh Rajput commits suicide
This is Ahmad Essam
Karan Johar says he is now available for Father roles...
India’s Covid Cases record a steep rise – cross the...
Rockstar singer Guru Randhawa releases a devotional song amid coronavirus...
Happy Buddha Purnima 2020 Quotes and Wishes for Facebook, WhatsApp
Neetu Singh has been pouring love and gratitude in her...
After e – commerce gets a go ahead, day 1...
News of migrants being asked to pay for their train...
Home Entertainment Idris Elba Popular English Actor Has Tested Positive For Coronavirus !
Entertainment

Idris Elba in his  recent twitter post announced to his fans that he had  tested positive for Coronavirus, but went on to add that despite the confirmation of this dreaded virus he was feeling fine.

Idris had attended the “ Cats “ premiere in New York on Friday and after he found out that he had been exposed to the virus through close contact with someone else who had been tested positive he underwent a test and his infection was confirmed. He quarantined himself immediately thereafter.

The 47 year old actor went on to give a hard hitting message on social media to raise  awareness about Coronavirus and urging people to be careful.

“I quarantined myself and got tested immediately and got the results back today,” Elba said. “Look, this is serious, you know? Now is the time to really think about social distancing, washing your hands” he said.

He then added “Stay home people and be pragmatic. I will keep you updated on how I’m doing 👊🏾👊🏾 No panic.” He also explained that although he was not showing any symptoms of the disease he could be a carrier and spreading it unknowingly, and therefore stressed on the importance of self-isolation and social distancing. 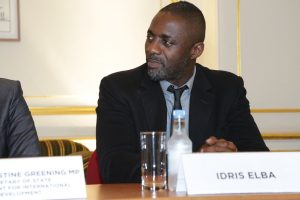 “Transparency is probably the best thing for this now,” Elba said. “If you’re feeling ill, if you feel like you should be tested or you’ve been exposed, do something about it.”

Elba is remembered for his role as Stringer Bell in the Wire , a series on HBO, as DCI John Luther in the BBC One series Luther, and for his portrayal of Nelson Mandela in the biographical film on Mandela , titled ; Mandela : Long Walk to Freedom. His upcoming film is The Suicide Squad.

The other Hollywood celebrities who have recently tested positive for COVID – 19 were 63 year old Oscar winner actor Tom Hanks, and Rita Wilson who are currently quarantined in Australia. They had come down with symptoms resembling a cold, chills and body aches and later on tested positive for Coronavirus.

Hanks  wrote – “To play things right, as is needed in the world right now, we were tested for the Coronavirus, and were found to be positive”

They have taken to social media and are regularly posting updates of their health to their countless fans who are concerned and keeping a track of their wellbeing.

In the videos that Elba posted online his wife Sabrina Dhowre appeared besides him. Elbe mentioned that both of them were doing okay although she had not been tested. He further went on to elucidate that in these trying times the need for people all over the world is to remain united ,think and care for each other.