Trending News
Is the lockdown during Covid 19 or mental depression to...
Shocker for Bollywood – Actor Sushant Singh Rajput commits suicide
This is Ahmad Essam
Karan Johar says he is now available for Father roles...
India’s Covid Cases record a steep rise – cross the...
Rockstar singer Guru Randhawa releases a devotional song amid coronavirus...
Happy Buddha Purnima 2020 Quotes and Wishes for Facebook, WhatsApp
Neetu Singh has been pouring love and gratitude in her...
After e – commerce gets a go ahead, day 1...
News of migrants being asked to pay for their train...
Home Entertainment Varun Dhawan dubs for Coolie No 1 braving the Bollywood Coronavirus Lockdown
Entertainment

Fans of  Varun Dhawan were treated to a picture of his where he is seen dubbing for his forthcoming film “Coolie No. 1 “ In these current times  shooting for the Television and Film Industry in Bollywood has come to a grinding halt, with celebrities and artists staying indoors and confined to their houses. This is due to the precautionary measures being taken to ward off the global Coronavirus pandemic which has taken a huge toll in India where the latest count stands at 137 with Maharashtra being the epicentre. 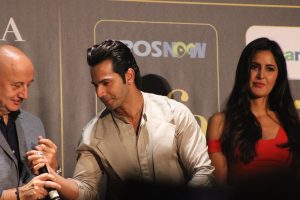 Actor Varun Dhawan however, managed to complete a bit of his pending work by dubbing for his upcoming film Coolie No. 1, this film is directed by his father David Dhawan and stars Sara Ali Khan as his co-star in the female lead. Sara Ali Khan on the other hand has been making social media news recently when she posted a video on her Instagram, where she is seen taking a tour of the streets of Varanasi and taking her viewers along on this tour.

Nearly all Bollywood celebrities have announced that they are self-isolating themselves and so did Varun Dhawan but he landed up at the dubbing studio recently  to complete his work.

The photos released so far of Varun Dhawan and Sara Ali Khan give a peek into the sizzling chemistry between them and their fans surely will have a lot to look forward to in this film as this promises to be  a good entertainer. This film is a remake of the film of the same name that was released in 1995 which had Govinda in the lead. The upcoming “Coolie No. 1 “has apart from Varun and Sara in the lead roles, Paresh Rawal in a supporting role.  The producers of the film are Jacky and Vishnu Bhagnani and music is by Tanishk Bagchi , Yo Yo Honey Singh and Sandeep Shirodkar.

The film was scheduled to be released on May 1 but in view of the current situation due to the COVID – 19 directives where the cinema halls are shut down in metro cities; there is a high possibility of the release date being postponed.

Meanwhile fans welcomed the smiling selfie posted by Varun Dhawan of him in the recording studio with the film playing in the background.