Trending News
Is the lockdown during Covid 19 or mental depression to...
Shocker for Bollywood – Actor Sushant Singh Rajput commits suicide
This is Ahmad Essam
Karan Johar says he is now available for Father roles...
India’s Covid Cases record a steep rise – cross the...
Rockstar singer Guru Randhawa releases a devotional song amid coronavirus...
Happy Buddha Purnima 2020 Quotes and Wishes for Facebook, WhatsApp
Neetu Singh has been pouring love and gratitude in her...
After e – commerce gets a go ahead, day 1...
News of migrants being asked to pay for their train...
Home Technology The Launch of Apple iPhone SE2, iPadPro in March cancelled due to the Coronavirus scare
Technology

Since a long time all eyes were on the budget iPhone , the iphone SE2 or iphone 9  to be launched in March. In addition to the phone Apple was also planning to launch an iPad Pro but now the event has been cancelled. The  Cult of Mac’s  report  mentioned that  due to a delay in the production of iphone SE2. Apple had postponed the March product launch event 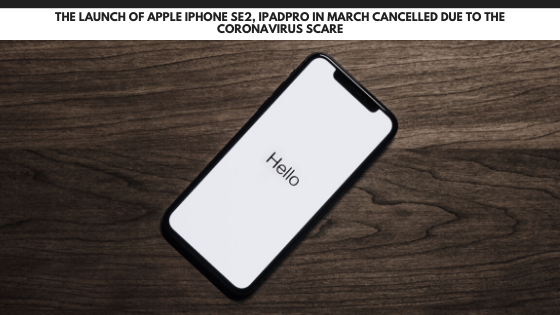 With the number of people being exposed to the Coronavirus on the increase and the risk getting higher by the day the decision to postpone this event was taken especially since it was planned in California in a closed space in a building. It was planned at the Apple Park in Cupertino with 1000 people coming together in the Steve Jobs Theater in close proximity of each other thus increasing the chances of infection.

It is reported that this cancellation came into effect after California’s Santa Clara County Public Health Department ‘s order on March 9 with instructions to cancel any event of large  gatherings with more than  1000 people between March 11th to April 1st.

California has reported 2 deaths from Coronavirus and a total of 133 confirmed cases so far. United the total number of confirmed cases of coronavirus in the US has gone up to 900 with a death toll of 30.  The deadly coronavirus has claimed over 4200 lives and over 117,300 infected people worldwide.  This began in December 2019 as we know in  China’s Wuhan which was  the epicenter of this epidemic. After China which is the worst-affected country, we have Italy, Iran and South Korea following suit.

The iphone SE2 or iphone 9 was expected to be Apple’s second budget phone after the iphone SE2 . The features in the new phone were supposed to be a 4.7 inch display while looks wise it would resemble the iphone 8 with not much of a change. It was to be powered by the latest A13 bionic processor and the home button was to be re-introduced.