Trending News
Is the lockdown during Covid 19 or mental depression to...
Shocker for Bollywood – Actor Sushant Singh Rajput commits suicide
This is Ahmad Essam
Karan Johar says he is now available for Father roles...
India’s Covid Cases record a steep rise – cross the...
Rockstar singer Guru Randhawa releases a devotional song amid coronavirus...
Happy Buddha Purnima 2020 Quotes and Wishes for Facebook, WhatsApp
Neetu Singh has been pouring love and gratitude in her...
After e – commerce gets a go ahead, day 1...
News of migrants being asked to pay for their train...
Home Entertainment Go Goa Gone 2 plot will centre around ‘Aliens’, says filmmaker Dinesh Vijan.
Entertainment

Fans of the 2013 zombie movie “Go Goa Gone” can rejoice, as Maddock Films are coming with a sequel to the comedy flick. Eros International & Maddock Films made an announcement on the same & filmmaker Dinesh Vijan also revealed that the story of “Go Goa Gone 2” will revolve around ‘Aliens’. He also confirmed that the team of his upcoming horror-comedy ‘Roohi Afzana’ is working on the script. 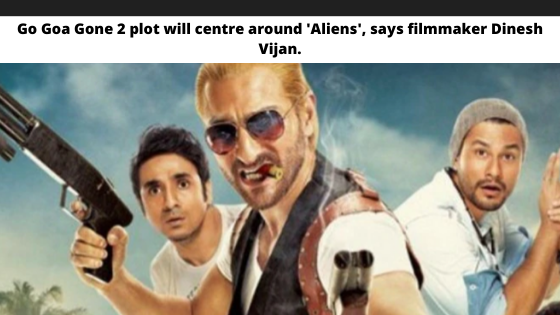 Talking on the same, Vijan said, “The team of Roohi Afzana is writing the sequel. The writer came up with the idea and I loved it and then we developed it. Eros said let’s announce it and we did. We just need to give every actor, who was there in the first part, a little more like a 2.0 version and bring something new. Zombie element won’t be there, we are doing it with aliens. The world will be similar like same emotion, same comic timing, like stoner comedy, but a new journey.”

Vijan has not approached the original cast of the film yet, still, hoping that he can get all of them back on board for the sequel, the producer said, “We haven’t approached the actors yet. The intent is to get everybody. They should be happy and like the role. There will be two new additions to the cast – one male and female. It will start by the end of the year.” They have also decided the month for releasing the sequel as March 2021.

Vijan is currently looking forward to Roohi Afzana starring Rajkummar Rao, Janhvi Kapoor & Varun Sharma which is also a horror-comedy & is about a ghost who abducts brides on their honeymoons. The film is slated to release on June 5, 2020. The producer has also started work on his next named ‘Munjha’ after Roohi Afzana. Talking on the same, the filmmaker said, “When Stree was ready, the script of Roohi Afzana was being worked on. Now Roohi Afzana will come and script of Munjha is getting ready and then there is one more. Then we will do the second part of everything and then they will all merge. That’s the idea. Each one of them is bigger than the previous one.”

Speaking on choosing horror-comedy as his genre fro films, he further added, “In horror-comedy, you are afraid but you laugh too. It is fun. Horror-comedy universe is the only thing I have for Maddock’s future right now. Then I will build one more universe.”