Trending News
Is the lockdown during Covid 19 or mental depression to...
Shocker for Bollywood – Actor Sushant Singh Rajput commits suicide
This is Ahmad Essam
Karan Johar says he is now available for Father roles...
India’s Covid Cases record a steep rise – cross the...
Rockstar singer Guru Randhawa releases a devotional song amid coronavirus...
Happy Buddha Purnima 2020 Quotes and Wishes for Facebook, WhatsApp
Neetu Singh has been pouring love and gratitude in her...
After e – commerce gets a go ahead, day 1...
News of migrants being asked to pay for their train...
Home Technology As a part of a test, Netflix upgrades to HD video streaming in India for basic plans & Mobile.
Technology

It is good news for all the “Netflix” crazy fans in India who never leave their phones because they are addicts of the video streaming platform. Netflix has decided to upgrade its streaming video quality from Standard Definition (SD) to High Definition (HD) for its basic plans & mobile in India as part of a testing. 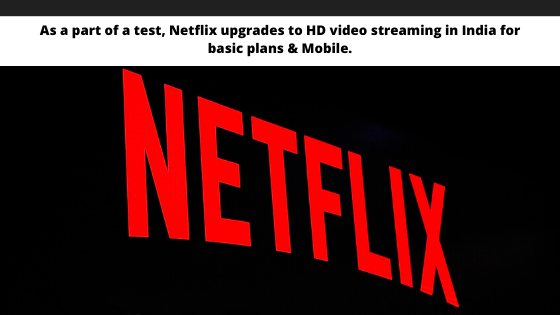 Since the start of February, the streaming platform has upgraded its plans as a part of a test in India. This means that subscribers who were previously streaming videos in 480p with their mobile & basic plans of Rs 199 and Rs 499 per month respectively will now be able to stream content in 720p. However, Netflix will continue offering its Standard Rs 649 monthly plan with full HD & Premium Rs 799 monthly plan with 4K+ HDR video quality.

The upgradation of the plans has been done as part of a testing that the company is currently running in India. It is also said that since it is only a test, it would not be rolled out on a larger scale & it is also not made clear by the company whether the test will run only in India or other markets of Netflix as well.

A spokesperson from Netflix also confirmed the news by quoting, “We are always looking for ways in which to make the Netflix experience more immersive and enjoyable for our members. At the moment, this is a test, and might not be rolled out widely.”

It is speculated that the move to upgrade the plans was taken after the new video streaming platform ‘Disney Plus’ announced its entry in the market, which would take place on March 29. And, looking at the competition, Netflix already faces in the video streaming space from competitors like Amazon Prime, Hotstar, ZEE5, etc. it was important for Netflix to bring about a change in their plans.

The company in the past as well had introduced similar India-exclusive plans like their Mobile plan was initially launched as India-exclusive,but later were even launched in other markets like Indonesia & Malaysia. However, at this early stage, it can’t be still confirmed whether the new upgraded plans will roll out to other markets as well.