Trending News
Is the lockdown during Covid 19 or mental depression to...
Shocker for Bollywood – Actor Sushant Singh Rajput commits suicide
This is Ahmad Essam
Karan Johar says he is now available for Father roles...
India’s Covid Cases record a steep rise – cross the...
Rockstar singer Guru Randhawa releases a devotional song amid coronavirus...
Happy Buddha Purnima 2020 Quotes and Wishes for Facebook, WhatsApp
Neetu Singh has been pouring love and gratitude in her...
After e – commerce gets a go ahead, day 1...
News of migrants being asked to pay for their train...
Home Nation IndiGo cuts flying ban of Kunal Kamrato three months.
Nation

Comedian Kunal Kamra, who always take place in headlines every other day for the kind of ‘tweets’ he makes to others for sharing his opinions on many political matters including the current riots happening in major parts of the country against the CAA, his name flashed more on newspapers ever since he took a dig at anchor Arnab Goswami on a flight to Lucknow.

The former kept asking the anchor questions which the latter did not pay heed to. This uncalled for behaviour of Kamra was criticised by many from the right-wing & many politicians from the centre called out Kunal for his misbehaviour. 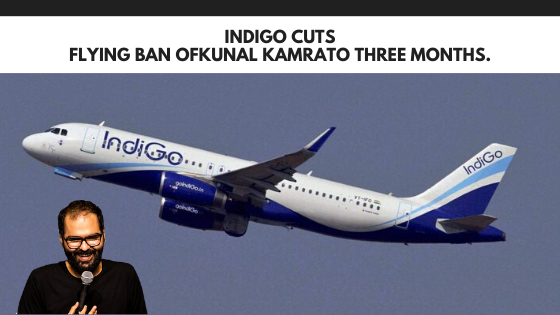 Following the incident, Kamra was banned from flying in IndiGo for six months after he tweeted his video with the anchor where the comedian jeered the latter on board a flight from Mumbai to Lucknow. Now, recent reports suggest that IndiGo’s internal committee after investigating the matter has decided to reduce the flying ban of Kamra from six months to three months which will be effective from January, 28.

Following what IndiGo initially did to ban Kamra for six months, SpiceJet, GoAir & Air India also banned him for an indefinite period. Only Vistara & Air Asia India did not put a flying ban on him giving due processes.

However, post a petition filed by Kamra challenging his flying ban in Delhi High Cour , IndiGo’s committee admitted to the court during the hearing that it has approved a flying ban of 3 months on Kamra.

IndiGo however, declined to quote anything regarding the matter citing that it is under legal consideration.