Trending News
Is the lockdown during Covid 19 or mental depression to...
Shocker for Bollywood – Actor Sushant Singh Rajput commits suicide
This is Ahmad Essam
Karan Johar says he is now available for Father roles...
India’s Covid Cases record a steep rise – cross the...
Rockstar singer Guru Randhawa releases a devotional song amid coronavirus...
Happy Buddha Purnima 2020 Quotes and Wishes for Facebook, WhatsApp
Neetu Singh has been pouring love and gratitude in her...
After e – commerce gets a go ahead, day 1...
News of migrants being asked to pay for their train...
Home Nation PM Modi’s ‘go-to-man’ Ajit Doval, given the mandate to control the situation in Delhi amidst the on-going riots.
Nation

The genius National Security Advisor to the PM of India, Ajit Doval has been approached by PM Narendra Modi for taking control of the sad state of affairs currently ongoing in the national capital in the form of riots. Putting the focus on the worsened situation at Delhi, hit by continuous riots, which has killed at least 20 people in the communal riots, the PM of India has asked Doval to bring back normalcy in the state. Modi has given the mandate to Doval to bring the situation under control which has hit Northeast Delhi. 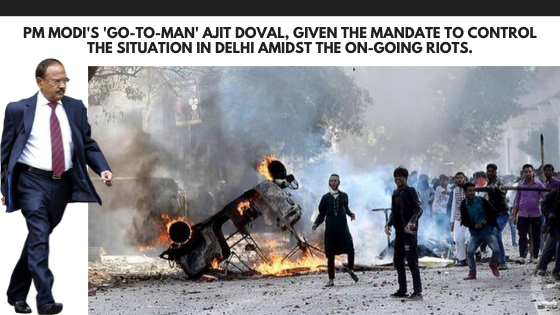 Jaffrabad and Seelampur were the riot-hit areas which were inspected by Doval with other officers. They also met police officers & provided them with essential directives. They further had a meeting with leaders from various communities for mitigating the stressful turn of events according to the officials.

Patnaik, was criticised for not being able to take control of the situation in the backdrop of the US President making a 36-hour visit to India along with his family, Doval apparently handpicked Shrivastava for carrying out this assignment.

Headed by PM Modi, Doval on Wednesday briefed the Cabinet Committee on Security (CCS), India’s top-most body on strategic affairs after critical observation carried out on Tuesday at the riot-hit areas. The officials informed that the National Security Advisor talked about the ground situation in the areas suffering from communal riots against the Citizenship amendment act. He also discussed about the steps to put an end on the communal riots &bring back normalcy as early as possible.

Last year in August, for more than a fortnight Doval had even camped in Jammu and Kashmir post the repudiation of Article 370.

The Intelligence Bureau Chief, Ajit Doval (75) is said to be a close comrade & a go-to-man of Modi who always approaches him for any emergency like situation in the country.