Trending News
Is the lockdown during Covid 19 or mental depression to...
Shocker for Bollywood – Actor Sushant Singh Rajput commits suicide
This is Ahmad Essam
Karan Johar says he is now available for Father roles...
India’s Covid Cases record a steep rise – cross the...
Rockstar singer Guru Randhawa releases a devotional song amid coronavirus...
Happy Buddha Purnima 2020 Quotes and Wishes for Facebook, WhatsApp
Neetu Singh has been pouring love and gratitude in her...
After e – commerce gets a go ahead, day 1...
News of migrants being asked to pay for their train...
Home Technology Dark mode feature from WhatsApp will now be made available to WhatsApp desktop application & WhatsApp web.
Technology

Since last year, WhatsApp made headlines in almost all news portals for introducing its dark mode feature to iOS & Android apps. The dark mode feature was touted as the most sought after feature for the messaging app & so the app rolled out the feature earlier this year for mobile devices in beta versions of Android & iOS. 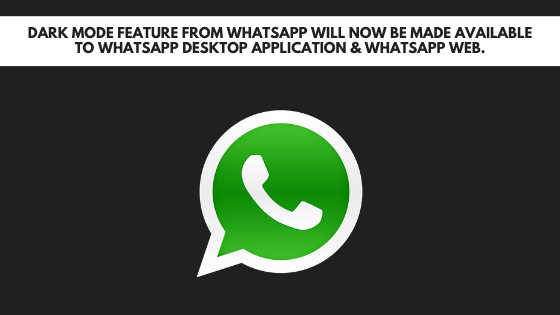 The dark mode theme which is currently available for iOS & Android phone users in beta versions will soon be made available in stable versions. The desktop application & WhatsApp web are also getting a makeover & screenshots of the same were posted by WABetaInfo showing the new dark interface.

The feature uses a dark grey hue for saving users from bright light interfaces in the middle of the night, although it doesn’t feature an OLED-friendly theme, the interface is dark enough to offer a dark theme feature to users.

Twitter, on the other hand, offers both the options of a dark grey theme in its web interface as well as a pitch-black OLED-friendly theme to its users.

However, the work is still ongoing to properly put the new feature in place for web users & desktop application& clearly needs much time for implementing it. WhatsApp tracker had posted another screenshot which showed different emojis but, had a white background. This means, that the feature will definitely take a good amount of time for getting introduced for the web users & desktop application.

The dark mode feature had taken an ample amount of time to get implemented even for the Android & iOS apps hence; it could be expected that the dark theme feature for desktop application & WhatsApp web will also take a considerable amount of time for its successful implementation.