Trending News
Is the lockdown during Covid 19 or mental depression to...
Shocker for Bollywood – Actor Sushant Singh Rajput commits suicide
This is Ahmad Essam
Karan Johar says he is now available for Father roles...
India’s Covid Cases record a steep rise – cross the...
Rockstar singer Guru Randhawa releases a devotional song amid coronavirus...
Happy Buddha Purnima 2020 Quotes and Wishes for Facebook, WhatsApp
Neetu Singh has been pouring love and gratitude in her...
After e – commerce gets a go ahead, day 1...
News of migrants being asked to pay for their train...
Home Technology Samsung closed down its operation at a plant in Gumi city of South Korea as an employee tested positive for Coronavirus.
Technology

The biggest technology company in South Korea Samsung had to shut down its operations for another case which tested positive in Coronavirus. The company which has one of its plants in the Gumi city of South Korea had to close its operations due to the virus outbreak affecting one of its employees. They closed the operations over the weekend & also planned to open operations again on Monday afternoon at the local time. 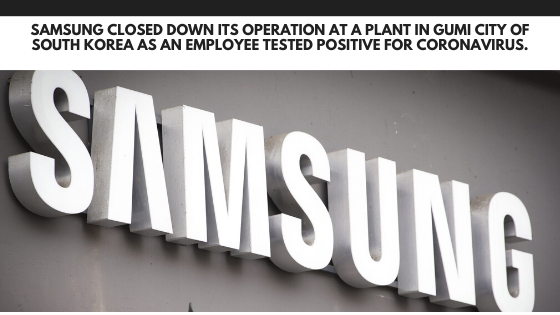 Looking at the current scenario, where a rising number of cases are getting registered of people getting affected by the virus, other tech companies in South Korea like LG Electronics are also taking radical & precautionary steps in fighting against the outbreak of the virus.

Various industrial sectors have been affected since the epidemic spread like wildfire in the world, originating from China. One of the most affected market sectors is technology since many products are manufactured & produced in China & the industry had to see a huge downfall in their sales as many operations had to forcibly be shut down due to the epidemic. Shares of Samsung Electronics dipped to 3% in Seoul.

Beginning from China, the virus spread to other nations as well, including Korea. And, till now, around 750 cases have already been confirmed, affected by the virus. Many steps have been taken by companies from Japan to Singapore for limiting the spread of the virus within their facilities & among their employees.

Centers for Disease Control in South Korea on Monday recorded anadditional 161 virus affected cases, amounting to a total of 763. The number of death cases also reached 7. The city of Daegu in recent days also saw a rise in the number of virus cases.

The stopping of operations by companies have really affected their business overall. Gumi already has several facilities operated not only by Samsung but other companies as well like LG Display, LG Electronics, Toray group, etc. There are two production lines of Samsung for some of its smartphones in Gumi, which is around 200km southeast of Seoul.

LG Electronics, another tech company, having TV plants in the Gumi industrial complex, had to ask its employees coming from Daegu to work from home. They have even requested their workers who have visited the Daegu area to not come to the office for two weeks. They have also restricted their headquarter staff to visit the region without taking approval from the management.

Following the shutting down of many of its operations in South Korea, Samsung even shifted its major operations to Vietnam but still produced a few of its premium models at the plant in the Gumi city.