Trending News
Is the lockdown during Covid 19 or mental depression to...
Shocker for Bollywood – Actor Sushant Singh Rajput commits suicide
This is Ahmad Essam
Karan Johar says he is now available for Father roles...
India’s Covid Cases record a steep rise – cross the...
Rockstar singer Guru Randhawa releases a devotional song amid coronavirus...
Happy Buddha Purnima 2020 Quotes and Wishes for Facebook, WhatsApp
Neetu Singh has been pouring love and gratitude in her...
After e – commerce gets a go ahead, day 1...
News of migrants being asked to pay for their train...
Home Entertainment Priyanka Chopra ready to essay the role of Maa Anand Sheela, the convicted Bioterrorist & right-hand of Osho for an Amazon Studios film.
Entertainment

A few months ago, there were headlines in newspapers & online news portals about Priyanka Chopra playing Maa Anand Sheela for her next production venture. Well, the speculations made then, stands true now as Priyanka is all set to play the role of Maa Anand Sheela in a film made for Amazon Studios. 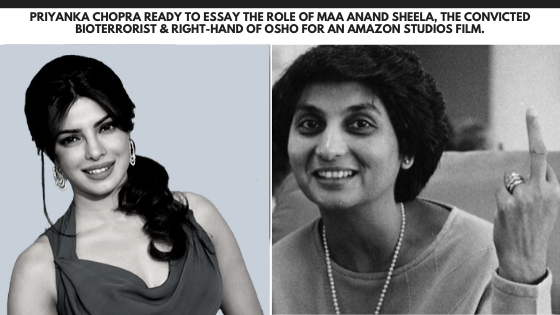 Priyanka would not just be playing Osho’s personal secretary in the film, but will also be donning the hat of a producer for the upcoming film. Barry Levinson, director of ‘Rain Man’ would be helming the film as a director whose script has been written by Nick Yarborough. Priyanka, with her production Purple Pebble Pictures along with Barry Levinson’s Baltimore Pictures & Permut Presentations of David Permut and Jason Sosnoff will be producing the film together.

‘The Sky is Pink’ actress had first made an announcement on the same on The Ellen DeGeneres Show. Earlier in a statement, she said, “I am developing a feature film with Barry Levinson. He did Rain Man and he is an iconic American director. And we are developing it as the character of Sheila, who was this guru (Osho) who originated from India, his right-hand woman and she was just devious and created a whole cult in America and brought people here. He was called Osho. I am developing that next for me to star in and produce in which I think would be really cool.”

Netflix documentary ‘Wild Wild Country’ made Maa Anand Sheela’s story reach the people worldwide. Sheela was considered spiritual guru Rajneesh’s (Osho) right-hand. She was Osho’s personal secretary form 1981-1985 & managed the Rajneeshpuram Ashram in Wasco County, Oregon. She was the mind behind the 1984 biggest bioterror attack that the US ever saw & was also convicted for the same. She then flew to Europe after the attack as the prime escapee accused of wiretapping, arson, mass poisonings & attempted murder. She was sentenced in federal prison for 20 years & later got paroled after 39 months.

On the work front, Priyanka is also gearing up for her next Hollywood project with a lead in ‘The Matrix reboot.’ She would also be seen in Robert Rodriguez’s ‘We Can Be Heroes’ & Ramin Bahrani’s The White Tiger.