Trending News
Is the lockdown during Covid 19 or mental depression to...
Shocker for Bollywood – Actor Sushant Singh Rajput commits suicide
This is Ahmad Essam
Karan Johar says he is now available for Father roles...
India’s Covid Cases record a steep rise – cross the...
Rockstar singer Guru Randhawa releases a devotional song amid coronavirus...
Happy Buddha Purnima 2020 Quotes and Wishes for Facebook, WhatsApp
Neetu Singh has been pouring love and gratitude in her...
After e – commerce gets a go ahead, day 1...
News of migrants being asked to pay for their train...
Home Technology Private invite links for WhatsApp groups can now even be found through Google search.
Technology

A simple Google search can now reveal your ‘private’ WhatsApp group invite links. With revealing the private links for joining groups on the messaging app, it may also spill out the details of group members like their names, phone numbers, etc. The so-called ‘private’ links are not private anymore, as they can be found by a normal search on Google, which will also show other details about the group members.

The WhatsApp groups have been indexed by Google revealing the private invite links to groups & this was first discovered by Jordon Wildon, a Deutsche Welle journalist. 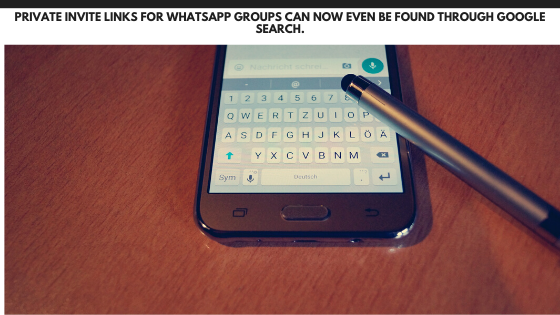 This posesa severe issue for the privacy of the people using the messaging app since anyone can find a link to a WhatsApp group via a Google search & join it. However, Google & WhatsApp do not see the issue as a flaw.

Jane Wong, App reverse-engineer on Twitter had even put a screenshot & could see nearly 4,70,000 WhatsApp groups on Google when searched for “chat.whatsapp.com“.

A spokesperson from WhatsApp in a statement had revealed, “Group admins in WhatsApp groups are able to invite any WhatsApp user to join that group by sharing a link that they have generated. Like all content that is shared in searchable, public channels, invite links that are posted publicly on the internet can be found by other WhatsApp users. Links that users wish to share privately with people they know and trust should not be posted on a publicly accessible website.”

Danny Sullivan, public search liaison from Google replying to Wildon’s tweet said, “Search engines like Google & others list pages from the open web. That’s what’s happening here. It’s no different than any case where a site allows URLs to be publicly listed. We do offer tools allowing sites to block content being listed in our results.”

However, the WhatsApp group invite links were introduced as a security feature wherein, a private message along with the link to the group can be sent by group admins to all those they wish to add in the group. For becoming a part of the group, users can approve the same. The invite links get expired after 3 days.

As the reports have revealed, the links get shown in public & this raises grave concerns about the user’s privacy & who can join the groups through the links.