Trending News
Is the lockdown during Covid 19 or mental depression to...
Shocker for Bollywood – Actor Sushant Singh Rajput commits suicide
This is Ahmad Essam
Karan Johar says he is now available for Father roles...
India’s Covid Cases record a steep rise – cross the...
Rockstar singer Guru Randhawa releases a devotional song amid coronavirus...
Happy Buddha Purnima 2020 Quotes and Wishes for Facebook, WhatsApp
Neetu Singh has been pouring love and gratitude in her...
After e – commerce gets a go ahead, day 1...
News of migrants being asked to pay for their train...
Home Nation For their beloved pet dog who died of Cancer, an NRI family from New Zealand performs ‘pinddaan’ in Gaya, India.
Nation

There are people who are staunch believers in the religion they are born no matter in which part of the world they live; they are always attached to their traditions & religious practices. One such NRI family that resides in New Zealand thought of coming to India to perform certain rituals, not for a human, but for their pet dog ‘Liken’. 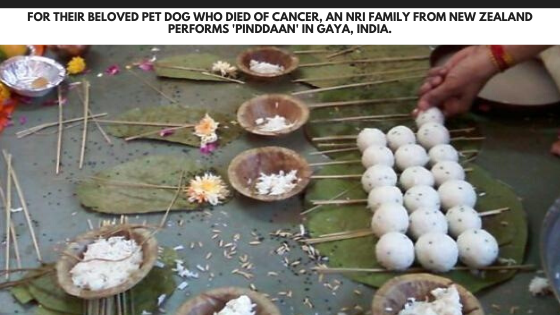 It is said that dogs are the best kind of human beings. This was taken literally by an Indian family from New Zealand who considered their beloved dog Liken as their family member & loved him as a human. This piece of news will be quite heartwarming to especially those who are dog lovers. And, when one loses their furry friend, the loss is as painful as that of a human being in a family.

The NRI family, originally from Purnia, now residents of New Zealand showed the love & bonding they shared with their pet Labrador Liken by coming to India just to perform some last rituals for him.

After the death of Liken who was suffering from Cancer, Pramod Chauhan accompanied by his wife Rekha & daughter Vishnupriya flew from Auckland to Patna last week to immerse the ashes of their dog in Ganga & perform a pind daan in Gaya.

Soon after reaching Patna on February, 13 the sorrowful Chauhan family next day took a boat to immerse their dog’s ashes in Ganga & on February, 15 left for Gaya to perform the rituals of a pind daan which is done for appeasing the departed souls according to Hindu traditions.

The family is also planning for a Bhandara to be held on February, 23 in memory of their loving dog. Chauhan, who is a businessman in Auckland, also supports a voluntary organisation that works for Cancer patients. The family is currently at their ancestral home in n Sipahi Tola in Madhubani Mohalla in Purnia.

Quoting to a TV channel, Pramod said, “Liken was brought up in a Hindu culture and participated in Hindu festivals with us. All our relatives will come for his Shraddh.”