Trending News
Is the lockdown during Covid 19 or mental depression to...
Shocker for Bollywood – Actor Sushant Singh Rajput commits suicide
This is Ahmad Essam
Karan Johar says he is now available for Father roles...
India’s Covid Cases record a steep rise – cross the...
Rockstar singer Guru Randhawa releases a devotional song amid coronavirus...
Happy Buddha Purnima 2020 Quotes and Wishes for Facebook, WhatsApp
Neetu Singh has been pouring love and gratitude in her...
After e – commerce gets a go ahead, day 1...
News of migrants being asked to pay for their train...
Home Lifestyle A suspended Uber driver, who took a passenger to police, says that he will do it again.
LifestyleNation 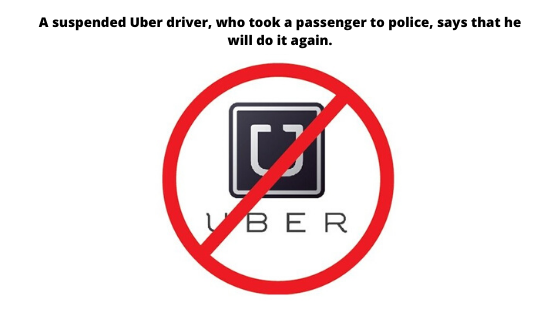 The passenger named Bappaditya Sarkar (23-year-old) who is a poet from Jaipur was picked by Gour from Juhu & while they were on their way, he overheard Sarkar talking on the phone about the ongoing protests in the nation. He was discussing about the protests against the CAA & NRC on the phone upon which Gour directly drove him to Santacruz police station. But, the driver who after the incident has been suspended by Uber is unremorseful about the act & is of the opinion that he will do it again if he hears another passenger talking on the same.

The incident took everyone by shock & Uber suspended the 35-year-old driver up to 72 hours while they undertake the investigation.

Gour confessed to secretly recording the poet’s conversation in the car when they were around Mithibai College & overheard Sarkar saying, “Country mein toh aag lagne wali hai (The country is going to burn). Gour further said that he felt something was doubtful & the poet was speaking of writing a song on azadi & wanted it to go viral. And, the poet even said how the female audiences also like it.

When asked about his invasion in the passenger’s privacy, Gour responded by saying that it is not about privacy if someone talks about doing something wrong without any public knowledge. He said that if a person’s privacy disturbs other person’s privacy, then that is not valid & the ongoings in Shaheen Bagh is against the growth of the country. Gour said that the poet even talked about doing the same in Mumbai.

Santacruz police questioned both of them for a few hours after Gour handed over the recording to them as evidence & later Sarkar was let off. But, Gour admitted to saying that Sarkar would have been behind bars, had he recorded the entire conversation.

Uber, on the other hand, suspended Gour for 72 hours for investigating the matter. The company also sent an apology to Sarkar on the same & said that the investigation is ongoing & the company has restricted access of the driver & would not like the passenger to pay for any inconvenience caused & refunded the charges for the trip.