Trending News
Is the lockdown during Covid 19 or mental depression to...
Shocker for Bollywood – Actor Sushant Singh Rajput commits suicide
This is Ahmad Essam
Karan Johar says he is now available for Father roles...
India’s Covid Cases record a steep rise – cross the...
Rockstar singer Guru Randhawa releases a devotional song amid coronavirus...
Happy Buddha Purnima 2020 Quotes and Wishes for Facebook, WhatsApp
Neetu Singh has been pouring love and gratitude in her...
After e – commerce gets a go ahead, day 1...
News of migrants being asked to pay for their train...
Home Health China stops 6 Indians from taking flight to Delhi & undertakes their medical screening to know if they have symptoms of Coronavirus.
HealthLifestyleNation

The much talked about epidemic that took a toll over China -Coronavirus has now spread across 20 countries which saw its first case in December last year in China starting with a seafood market that also traded wild animals in the provincial capital of Wuhan.

Now, the recent reports suggest that the Chinese government has stopped 6 Indians from boarding a ‘special flight’ of Air India to Delhi as the passengers were tested to have a high fever. The Chinese officials are now in work for checking whether these passengers have any symptoms of Coronavirus. 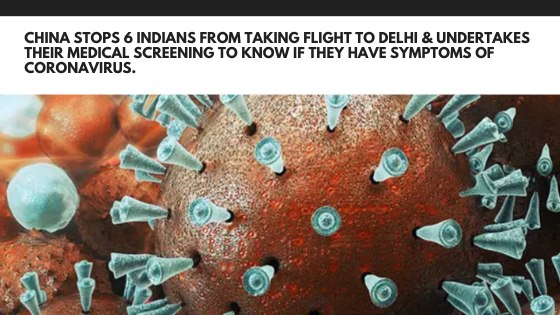 The first flight, Boeing 747 jumbo jet aircraft of 423 seats had brought back a total of 324 passengers which comprised of 3 minors, 110 professionals & 211 students (22 from Maharashtra & rest from Andhra Pradesh & Kerala) from where they were taken to Manesar for special quarantine camps.

The second flight is said to evacuate more Indians from Wuhan with a different aircraft & crew but with the same team of doctors, according to the national carrier Air India.

For this, the Indian embassy also thanked China for making the arrangements for evacuating Indians from Wuhan & tweeted saying, “An Air India flight carrying 324 Indian nationals from the coronavirus hit Hubei Province of China took off from Wuhan in the early hours of Feb 1. Majority of the passengers were Indian students. We sincerely thank the Chinese government for facilitating this flight.”

For the passengers that were evacuated by the first flight to Delhi,screenings took place at the airport with the help of Armed Forces Medical Services (AFMS) & Airport Health Authority (AHO) & the infected passengers are said to be shifted to an isolation ward at Base Hospital in Delhi Cantonment (BHDC). Two facilities have also been set up by the government in both Haryana & Delhi to quarantine the evacuees.

Passengers are treated based on them being classified into three groups: “close contact and non-contact case” & “suspect case” showing symptoms of cough, respiratory problems & fever.

Untill yesterday, the Chinese government confirmed that at least 259 already lost their lives & around 11,800 are currently infected with the virus.

The virus was also termed as an international health emergency by the World Health Organisation (WHO) on Friday.