Trending News
Is the lockdown during Covid 19 or mental depression to...
Shocker for Bollywood – Actor Sushant Singh Rajput commits suicide
This is Ahmad Essam
Karan Johar says he is now available for Father roles...
India’s Covid Cases record a steep rise – cross the...
Rockstar singer Guru Randhawa releases a devotional song amid coronavirus...
Happy Buddha Purnima 2020 Quotes and Wishes for Facebook, WhatsApp
Neetu Singh has been pouring love and gratitude in her...
After e – commerce gets a go ahead, day 1...
News of migrants being asked to pay for their train...
Home Entertainment Designer Wendell Rodricks criticises actress Priyanka Chopra on her Grammy dress, later deletes the post.
Entertainment

Designer Wendell Rodricks was in a mood to slam actress Priyanka Chopra for her splashy entry in a Ralph and Russo gown for the Grammy’s. The designer had taken to social media to put forward his concern about the dress which the actress wore for one of the most talked-about events in Hollywood the Grammy’s. 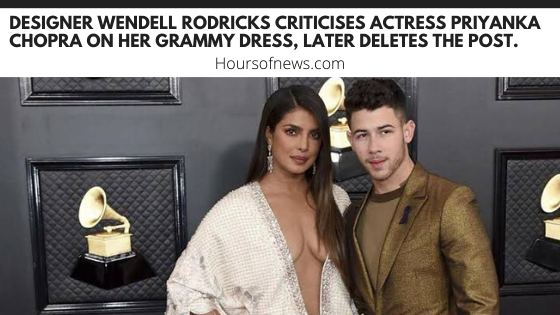 In a very ‘sarcastic post’ Rodricks had pointed out, “If you don’t have it, don’t flaunt it.” Making a comment on her gown by Ralph and Russo, he had said, “the neckline goes all the way from LA to Cuba.” Further, he added saying, “There is an age to wear some clothes.”

Priyanka, on the other hand, has been one such actress in both Bollywood & Hollywood who has also been known for her bold couture choices & there have been many especially from the industry as well who have always hailed her choices. But, this time around Priyanka was at the receiving end by Wendell who slammed her for making this bold choice.

Well, for the bold comments that Rodricks made, many even criticised him for doing that & having a stereotypical attitude towards it.  Soon after receiving criticism from many, he even removed the post. One of the many criticisers was actress Suchitra Krishnamoorthi who called out the designer for making such nasty comments & hailed Priyanka’s choice of dress.

In a lengthy post on Instagram, Suchitra said, “Was so upset to see this post on insta by Wendel Rodrigues who’s work I otherwise have a modicum of respect for. I think the fact that Priyanka is not trying to hide her belly with her clutch is what makes this pic so beautiful. Makes her the rockstar she is. Her confidence an inspiration to every woman. Women have been so enslaven by men’s opinion of how women should look this photograph of Priyanka to me at the world’s most publicized event is the height of liberation. You go girl and keep rocking it. I was never a fan of the lady but this pic has surely made me one.”

Later Rodricks put up another post to clarify what he meant & said, “For all those that said some really nasty things about me body shaming, here is my retort. Did I say anything about her body? No. Many women did. I just said the dress was wrong for her despite it being couture. It was more dress shaming than body shaming. Stop this sermon from high and read the post before you speak. There is an age to wear some clothes. Men with huge bellies should not wear tight T shirts. Same with women who wear minis past a certain age. If you don’t have it, don’t flaunt it. I stopped wearing Bermudas as I have a few varicose veins. Don’t make every issue body shaming, sexist or whatever. Or you can be false and fake resorting to being politically correct and not be truthful. If you don’t like my posts unfriend me.”