Trending News
Is the lockdown during Covid 19 or mental depression to...
Shocker for Bollywood – Actor Sushant Singh Rajput commits suicide
This is Ahmad Essam
Karan Johar says he is now available for Father roles...
India’s Covid Cases record a steep rise – cross the...
Rockstar singer Guru Randhawa releases a devotional song amid coronavirus...
Happy Buddha Purnima 2020 Quotes and Wishes for Facebook, WhatsApp
Neetu Singh has been pouring love and gratitude in her...
After e – commerce gets a go ahead, day 1...
News of migrants being asked to pay for their train...
Home Technology The dark theme feature from Google could be available in future for Android releases.
Technology

Last year in August, Google had introduced a system-wide dark mode for Android 10. The much talked about dark mode scheduling feature was made available in Android 10 on a few Beta versions. And, now recent reports suggest that the feature is going to make a comeback from Google but now on Android 11 versions. 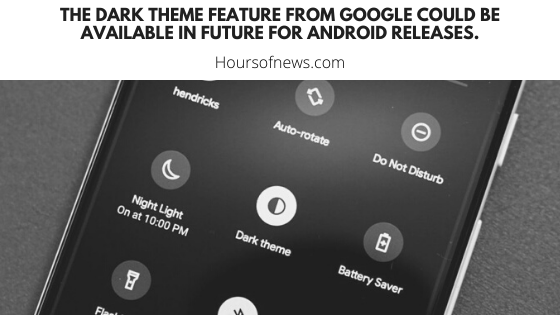 The dark theme feature was to make usage of phones easier at night & this made many app developers releasing similar dark theme for their app. With the rolling of Android 10 last August, Google did not offer one important feature in it – the dark mode scheduling feature. However, Google is going to introduce dark theme in its next Android update with Android 11.

As per reports from XDA Developers, Google presented the dark mode scheduling feature in Android 10 version in some beta versions, which was initially called Android Q. The company then depreciated the feature before rolling out Android 10 to its users in AppCompat v1.1.0. The company even clarified the reason behind doing this in a Reddit thread.

The feature was deprecated as it might have affected the user experience negatively. With the implementation of this feature, apps would suddenly restart while they are in use. The engineering team from Google commented, “the feature requires apps to request location permissions to be accurate.” In a statement, the company also said that the sunrise/sunset time calculations could be buggy even if the device showed the correct location.

Chris Banes from Android’s team in the Reddit thread said, “The system uses the calculator in ICU4J AFAIK, but that is a big chunk of code which we wouldn’t want AppCompat to depend on.”

Now the company, after fixing the bugs, has confirmed on the Google Issue Tracker that they will make the dark mode scheduling feature available in the future Android release. Google will either include the function in the Android 11 version, or it will drop as one of the feature drops in future.