Trending News
Is the lockdown during Covid 19 or mental depression to...
Shocker for Bollywood – Actor Sushant Singh Rajput commits suicide
This is Ahmad Essam
Karan Johar says he is now available for Father roles...
India’s Covid Cases record a steep rise – cross the...
Rockstar singer Guru Randhawa releases a devotional song amid coronavirus...
Happy Buddha Purnima 2020 Quotes and Wishes for Facebook, WhatsApp
Neetu Singh has been pouring love and gratitude in her...
After e – commerce gets a go ahead, day 1...
News of migrants being asked to pay for their train...
Home Technology Signing up for Messenger without a Facebook account will no longer be possible.
Technology

Up until now, there have been many users who used the messenger app without a Facebook account. However, the same cannot continue anymore.

Facebook has decided to change this & has updated its Help Center Page in order to reflect the same. That means from now on; users will have to first create a Facebook account compulsorily to use Messenger. 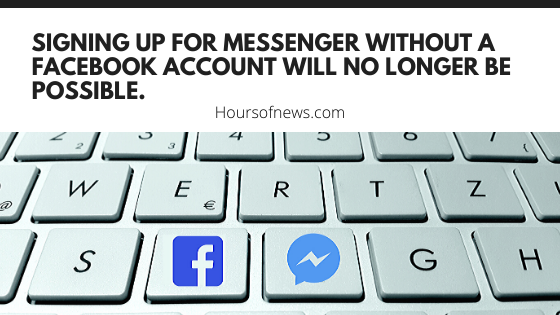 It was possible until now for anybody to sign-up for Messenger without having a Facebook account, but this facility will not be available anymore. Facebook confirmed the same to VentureBeat & said that new users of Messenger would need to have a Facebook account to chat with friends & close relations & hence, it has updated the Help Center Page to reflect these changes.

Initially, a user only had to enter their phone number to sign-up for Messenger without having a Facebook account or signing up for Facebook. This made many users chat with their friends, family & relatives through the app. And, now the company confirms that an account will be needed to sign-up for the app.

The change is for the new users who want to use Messenger. For all those who have already entered their phone numbers & signed up for the app, there is nothing to be done.

The entire motive behind making this new move for the company is to integrate all Facebook apps like WhatsApp, Instagram & Facebook Messenger & the same was also announced by the company earlier in 2019. Regarding this, Mark Zuckerberg, CEO of Facebook wrote a detailed post on his personal page & said, “the company wants to make it possible for its users to send messages to their contacts using any of its services.” And in doing so, their ultimate goal is to extend the interoperability to SMS too.

It is imperative to note that a report by App Annie posted that Facebook & Facebook Messenger are two of the most downloaded apps of the decade. Hence, Facebook’s strategy for asking people to first create an account on Facebook & then sign-up for Messenger is a clever decision to integrate all of Facebook’s apps.