Trending News
Is the lockdown during Covid 19 or mental depression to...
Shocker for Bollywood – Actor Sushant Singh Rajput commits suicide
This is Ahmad Essam
Karan Johar says he is now available for Father roles...
India’s Covid Cases record a steep rise – cross the...
Rockstar singer Guru Randhawa releases a devotional song amid coronavirus...
Happy Buddha Purnima 2020 Quotes and Wishes for Facebook, WhatsApp
Neetu Singh has been pouring love and gratitude in her...
After e – commerce gets a go ahead, day 1...
News of migrants being asked to pay for their train...
Home Entertainment All about the 66th National Film Awards held this year & its winners.
Entertainment

This year marked the 66th year of the renowned & one of the highest honours of our country for the film fraternity, The National Film Awards.

The ceremony saw the who’s who of the film industry as the award function honoured many talents of the film business in different categories. 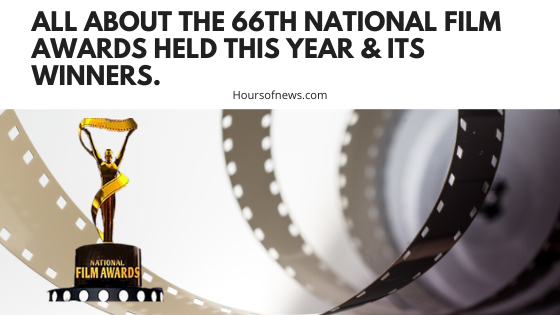 Vice-President Venkaiah Naidu was chief in distributing the National Awards at the Vigyan Bhawan last week in New Delhi.

A look at few of the National Film Awards winnersthis year –

Bollywood actresses Divya Dutta & Sonali Kulkarni turned hosts for the prestigious award ceremony & BJP MP Prakash Javdekar, Minister of Information & Broadcasting also graced the event & addressed the audience with a speech talking about the permission for shooting international films in India& how even after keeping busy, politicians clear the backlog of 2-3 films while travelling abroad.

Veteran actor & megastar of the Hindi Film industry Amitabh Bachchan was also supposed to be awarded the Dadasaheb Phalke award in the same ceremony but citing ill health; the star could not attend the ceremony & had to give it a miss.

However, Mr. Javdekar had announced during the ceremony that the highest honour of Indian cinema, Dadasaheb Phalke Award will be bestowed to the senior actor in a separate ceremony (which took place last Sunday, December, 29 at the Rashtrapati Bhavan & the megastar was felicitated by the President of India Ramnath Kovind.)

After receiving the honour, Bachchan gave an acceptance speech where he thanked the government of India, Information & Broadcasting Ministry and the jury members of the National Film Awards & said, “God has been kind, there have been blessings of my parents, the support of the filmmakers, producers, co-actors from the industry, but I’m most indebted to the love and constant encouragement by the Indian audience. That’s the reason I’m standing here. I accept this award with utmost humility and gratitude.”

Indian actress, producer & global star Priyanka Chopra too thanked the 66th National Film Awards for receiving the award for theMarathi film ‘Paani’ produced under her production house ‘Purple Pebble Pictures’ as the Best Film on Environment Conservation &added saying, “It has given us further impetus to continue on the path of telling the stories that combine entertainment with socially relevant issues. We are honoured that the film had an impact and that our efforts have been recognized.”